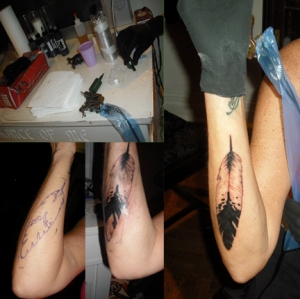 I got a new tattoo today. Finally. It’s one I’ve wanted since last fall. See, for the past few years I would get a new tattoo after every Burning Man. Thus far they have been: the word “cunt,” to symbolize my “owning” my cuntdom; the word “breathe,” after a season of hearing, saying and experiencing that word in many meaningful contexts; a partial Burning Man DPW (Department of Public Works) logo, to commemorate my first year helping build Black Rock City; a fork, because I felt like I was at a “fork in the road” of my life and because I kept finding forks , literally, in the road, during Playa Restoration.

Today’s tattoo is about 15 months later than I wanted it, due to life getting in the way and my bank account never really synching up with my desires. Not that my bank account is cooperating any more today than it was a year ago but after so many months of wanting, researching the symbolism of feathers, and being caught up in the whole 11:11 phenomenon, I decided that I had to get this particular tattoo on this date — January 11, 2011: 1/11/11 — to ensure the best possible juju. Plus I had a somewhat remarkable feather-related experience.

The back story on my passion for feather imagery is that during my first year working Playa Restoration I found a stunning sterling silver feather. I’ve been wearing it around my neck almost ever since I picked it up off the desert floor. I recalled having a pair of silver feather earrings that I’d probably had since high school. I don’t remember where or when I got them, possibly at a gift shop in Schroon Lake, and it’s been a long time since I’ve bought jewelry at a touristy gift shop! Anyway, I started wearing the earrings to match my necklace. Working post-event in 2008, I was taking down signs in Center Camp when I lost one of the earrings. I remember exactly where and when — I took off my sweater at one point — but never found it. And this year, during Playa Restoration, while playing a game of Scrabble with some friends, I told the story of finding my feather and losing my earring. One of my opponents looked at the remaining earring and said, “I found an earring in Center Camp that looks kinda like that. I’ll see if I can find it.” The next morning at breakfast, she showed up with the earring I’d lost two years earlier! That earring had been lying there in the desert dust for two years! And found its way back to me! So you can see how I’ve come to feel the way I do about feathers and why this year I became even more attuned to their symbolism.

But back to the tattoo. The design is an eagle feather that I sketched, then cut out of an 8’x4′ piece of plywood and mounted on the Trash Fence that serves as the boundary of Burning Man. It was one of a series of five feathers. They were briefly mounted in First Camp as decor for a wedding, then moved to the Trash Fence at Point 3, which is the apex of the city. If one were to follow the line from the Man to the Temple off into the distance, Point 3 would be the last point within Black Rock City, the furthest point a person can walk, making the feathers a distant destination. I registered them at The Artery as “Trash Fence Feathers,” made and mounted to look as if they’d been blown into this “corner” of trash fence.

I checked on them periodically and was initially disappointed when people began tagging them. Then, as they became covered in graffiti, I embraced the exuberant messages: “I made it!” “My first burn!” And from my friend Jamye, “I love you, Abby!” It was exciting that, having made art that wasn’t exactly interactive, people had chosen a way to interact with it. The feathers were pretty visible from a distance, even at night, when they were lit by small solar-powered lights. I loved the idea of people seeing something “out there” and making the journey to see what it was.

At the end of the event, rather than burning the feathers, I packed them into my van and took them home. Perhaps someday I’ll have a yard or some other suitable place to re-mount them. Until then, I’m wearing all three of my silver jewelry feathers and one of my “Trash Fence Feathers” on my right arm, permanently.

Thanks to Ronn, my tattoo artist! You can find him at Addiction Tattoo on St. Marks Place.